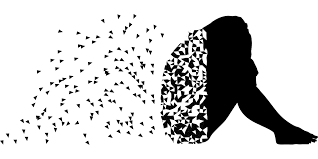 Insights:-This article given by conclusion of various article theory of depression and aimed-
1.To explore relationship between depression, anxiety, stress and self-harm with striving to avoid inferiority, feelings of shame and styles of attachment.
2.The dark side of competition, -how competitive behavior, striving to avoid inferiority are linked to depression, anxiety, stress and self-harm.

DEPRESSION – common co-morbid disorder in substance use disorder (SUD) patients. Depression is classified as a mood disorder, describe as feelings of sadness, loss, or anger that interfere with a person’s everyday activities. People experience depression in different ways. It may interfere with your daily work, resulting in lost time and lower productivity. It can also influence relationships and some chronic health conditions.

ANXIETY :-body’s natural response to stress. It’s a feeling of fear or apprehension about what’s to come. Eg- first day of school, going to job interview, or giving a speech may cause most people to feel fearful and nervous.

STRESS :- feeling of emotional or physical tension. It can come from any event, thought that makes feel frustrated, angry, or nervous. body’s reaction to challenge or demand. In short bursts, stress can be positive, such as when it helps you avoid danger or meet a deadline. But when stress lasts for a long time, it may harm your health.

SELF HARM :-
Self-harm or self-injury – intentional direct injury, one’s own skin tissues usually without suicidal intention. Other terms such as cutting and self-mutilation have been used for any self-harming behavior regardless of suicidal intent

Prevalence :-
The World Health Organization has reported that depression constitutes one of most common mental health problems, is a major personal, social and economic burden, and is increasing along with other mental health problems.
Self-harm, especially in younger cohorts, is also increasing (Dim mock, Grieve, & Place,2008, Fortune & Hawton, 2005). Many previous theories & studies suggested that rising rates of psychopathology in Western societies might be linked to increases in competitive behavior (Gilbert, 1989, James, 1998, Lasch, 1979). Recent researches suggests that rates of mental ill-health and national levels of fear are higher in competitive rather than caring societies (Arrindell et al., 2003, 2004).

This may increase vulnerability to depression, anxiety and stress.
theory suggests mood variation linked to security person feels in his/her social domain and extent to which they are sensitive to involuntary subordination. Both factors were significantly related to various fears of rejection, Self-harm was significantly associated with forms and functions of self-criticism, shame, and feelings of inferiority. The self-persecuting function of self-criticism especially linked self-harm, depression, and anxiety.
This article shows the importance of recognizing pathogenic effects of negative self-critical thoughts and feelings about self and the value of distinguishing different types of self-criticism.
Analyses of various studies revealed that the relationship between striving to avoid inferiority and depression was mediated by social rank variable of external shame, and also anxious attachment.

Findings :-
suggest elevated competitive behavior can have ’dark side’. When people feel insecure in their social environments, it can focus on hierarchical view themselves , others, with fear of rejection if they feel , become too inferior or subordinate. This may increase vulnerability to depression, anxiety and stress.

Depression anxiety and stress scale (DASS21) :-
This is shortened version of the DASS42 (Lovibond & Lovibond, 1995). It consists of 21 items; three subscales measure levels of depression (e.g. ‘I couldn’t seem to experience any positive feelings at all’), anxiety (e.g. ‘I was aware of dryness of my mouth’) and stress (e.g. ‘I found it hard to wind down’). The DASS21 subscales have good reliability, with Cronbach’s alphas of .94 for depression, .87 for anxiety and .91 for stress (Antony et al., 1998).

Self-harm inventory (SHI) :-
Developed by Sansone et al. (1998). 22-item inventory measuring responder’s history of self-harm behaviors. Items include questions regarding overdoses, suicide, cutting and hitting oneself. Responders mark ‘yes’ (scored as 1) or ‘no’ (scored as 0) to indicate whether they ever attempted each behavior, if so, how many times. Sc. begins with question ‘Have you ever intentionally or on purpose: followed by 22 items relating to self-destructive behavior such as ‘Driven recklessly on purpose?’ or ‘Abused prescription medication?’ The final question asks participants to disclose whether they ‘ever engaged in any other self-destructive behaviors not asked about in this inventory?’ scale found to have good reliability. The Cronbach’s alpha for this study is significant at 0.01 level.

One thought on “A Brief Overview: Depression, Anxiety & Stress”