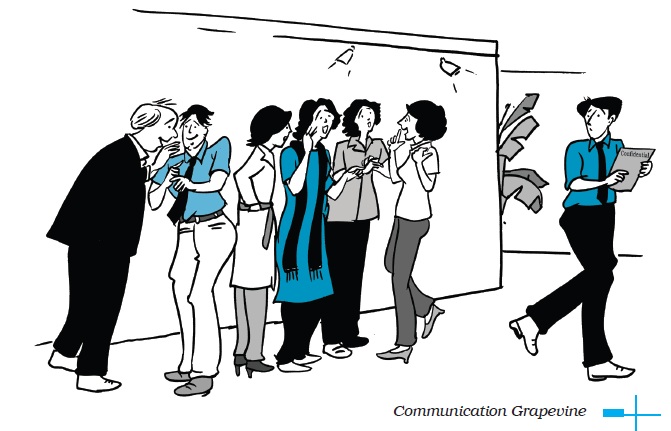 Introduction- Grapevine takes place within the organization and it is an informal, unofficial and personal communication channel or system. It is a complex web of oral information and it generally spreads rapidly and touches all the members of the organization. It stretches throughout the organization almost in all directions from ground to the authority levels. Basically it is a type of conversation between employees and superiors that do not follow any prescribed structure or rule-based system.

Significance of grapevine communication:
It is observed that grapevine channels carry information rapidly. As soon as an employee gets to know some confidential information, he becomes inquisitive and passes the details to his friend and then he passes it to another person. It really spreads information so quickly and even works as supplement in those cases where formal communication does not work. Feedback received by the managers from their subordinates on their policies is quick compared to formal channel of communication.
Sense of unity is created among the employees who share and discuss their views with each other. Grapevine also helps in developing group cohesiveness and serves as an emotional support system. This type of communication is vital for leaders to understand the impact it has on the work environment.

Patterns or Types of Grapevine:
The grapevine is largely horizontal in nature although it does not have any definite pattern or direction and it can flourish horizontally, vertically and even diagonally. As per the research work on the nature of grapevine, Prof. Keith Davis has classified it into four basic types –

Single Strand Chain: In the single strand chain information is passed through a line of persons to the ultimate recipient. In the figure, person a, tells b, who tells c, who tells d, and so on, till the information reaches most of the persons concerned.

Probability Chain: It is a random process in which someone transmits the information to others in accordance with the laws of probability and then these others tell still others in a similar way. This chain may also be called random process. A sense of unity is created by grapevine among the employees who share and discuss their views with each other. Group cohesiveness is developed by grapevine and it also serves as an emotional support system along with that it works as a supplement in those cases where we are not capable in using formal communication.