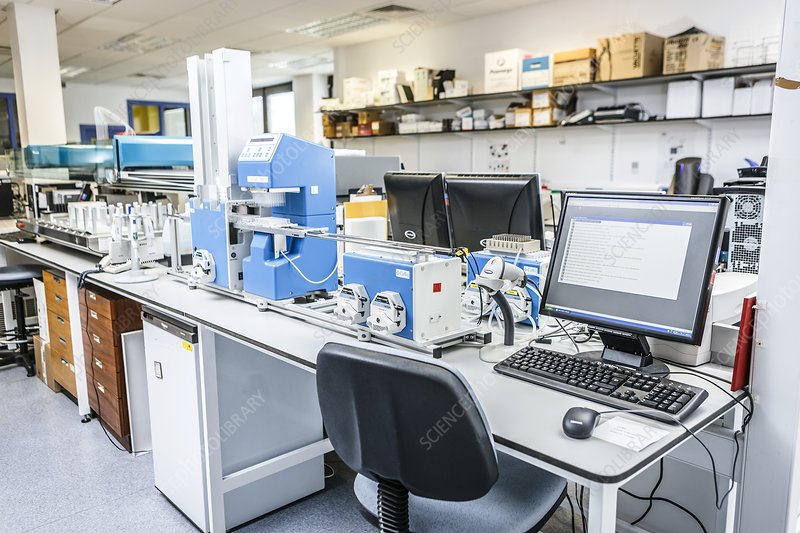 Introduction- High-throughput screening (HTS) is a method for scientific experimentation especially used in drug discovery and relevant to the fields of biology and chemistry. Using robotics, data processing/control software, liquid handling devices, and sensitive detectors, high-throughput screening allows a researcher to quickly conduct millions of chemical, genetic, or pharmacological tests. Through this process one can rapidly identify active compounds, antibodies, or genes that modulate a particular biomolecular pathway. The results of these experiments provide starting points for drug design and for understanding the non interaction or role of a particular location.

ASSAY PLATE PREPARATION:- The key labware or testing vessel of HTS is the microtiter plate: a small container, usually disposable and made of plastic that features a grid of small, open divots called wells. In general, microplates for HTS have either 96, 192, 384, 1536, 3456 or 6144 wells. These are all multiples of 96, reflecting the original 96-well microplate with spaced wells of 8 x 12 with 9 mm spacing. Most of the wells contain test items, depending on the nature of the experiment. These could be different chemical compounds dissolved e.g. in an aqueous solution of dimethyl sulfoxide (DMSO). The wells could also contain cells or enzymes of some type. (The other wells may be empty or contain pure solvent or untreated samples, intended for use as experimental controls.)

A screening facility typically holds a library of stock plates, whose contents are carefully catalogued, and each of which may have been created by the lab or obtained from a commercial source. These stock plates themselves are not directly used in experiments; instead, separate assay plates are created as needed. An assay plate is simply a copy of a stock plate, created by pipetting a small amount of liquid (often measured in nanoliters) from the wells of a stock plate to the corresponding wells of a completely empty plate.

REACTION OBSERVATION :- To prepare for an assay, the researcher fills each well of the plate with some biological entity that they wish to conduct the experiment upon, such as a protein, cells, or an animal embryo. After some incubation time has passed to allow the biological matter to absorb, bind to, or otherwise react (or fail to react) with the compounds in the wells, measurements are taken across all the plate’s wells, either manually or by a machine. Manual measurements are often necessary when the researcher is using microscopy to (for example) seek changes or defects in embryonic development caused by the wells’ compounds, looking for effects that a computer could not easily determine by itself. Otherwise, a specialized automated analysis machine can run a number of experiments on the wells (such as shining polarized light on them and measuring reflectivity, which can be an indication of protein binding). In this case, the machine outputs the result of each experiment as a grid of numeric values, with each number mapping to the value obtained from a single well. A high-capacity analysis machine can measure dozens of plates in the space of a few minutes like this, generating thousands of experimental datapoints very quickly.

Depending on the results of this first assay, the researcher can perform follow up assays within the same screen by “cherry picking” liquid from the source wells that gave interesting results (known as “hits”) into new assay plates, and then re-running the experiment to collect further data on this narrowed set, confirming and refining observations.

AUTOMATION SYSTEMS :- Automation is an important element in HTS’s usefulness. Typically, an integrated robot system consisting of one or more robots transports assay-microplates from station to station for sample and reagent addition, mixing, incubation, and finally readout or detection. An HTS system can usually prepare, incubate, and analyze many plates simultaneously, further speeding the data-collection process. HTS robots that can test up to 100,000 compounds per day currently exist. Automatic colony pickers pick thousands of microbial colonies for high throughput genetic screening. The term “UHTS” or “Ultra High Throughput Screening” refers to screening in excess of 100,000 compounds per day.

UTILITY OF HTS :- HTS techniques are used in the pharmaceutical industry for screening of enormous numbers of compounds in the drug development process. Chemicals are chosen to cover large areas of chemical diversity and to broadly probe biological function without earlier assumptions. These methods facilitate simple and convenient assay procedures and provide high levels of sensitivity. The whole process relies on automation and robotics, thus there is a possibility to test from thousands to a million samples per day. High throughput methods are in high demand in drug development today. Their main goal is to accelerate drug discovery by screening large libraries (e.g., combinatorial chemistry, genomics, protein, and peptide libraries) often composed of hundreds of thousands of drug candidates. HTS is playing an important role in early stage of drug development, providing qualitative and quantitative characterization of compound libraries and analytical support for preclinical and clinical ADME studies. Thus, HTS facilitates early elimination of unsuitable compounds. It is estimated that HTS contributes to savings of 130 million dollars and about 0.8 years of work over the development of a new drug. It is expected that in the not-too-distant future we will experience further miniaturization and elaboration of more selective markers.