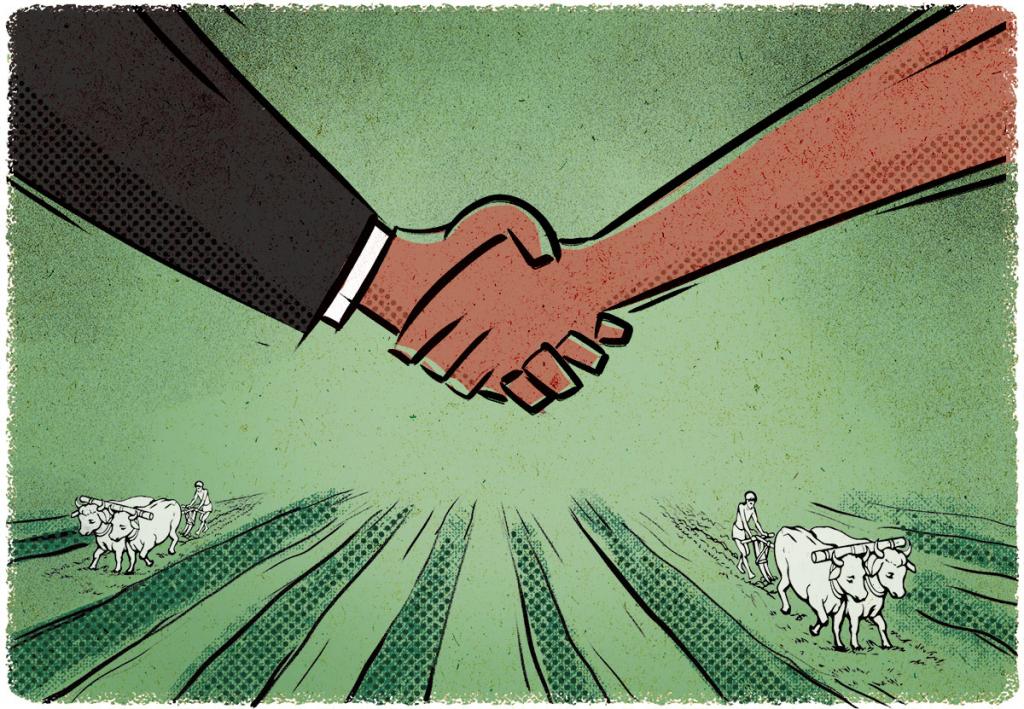 Introduction- It is a novel idea; but in a country where the ruling class openly favours corporates, it could prove disastrous for farmers. India’s agriculture sector makes a significant contribution to its Gross Domestic Product and provides livelihood for many millions of people. Agriculture is not only a means of trade and a source of livelihood, but is fundamentally associated with our culture. Today though, farmers are distancing themselves from farming activities because of decreasing incomes and are looking at alternative opportunities. These new developments will set into motion an exodus from villages to cities. Alternatively, in the hope of making quick money from their farmlands, farmers will be keen on giving their land on a contract basis.

Contract farming will prove to be disastrous for the lives of millions of people in India who are associated with the agriculture sector. How? Let us have a look.

The dangers within : Contract farming will give corporates an entry into the agriculture sector. They will proceed to aggressively capture new lands, thereby rendering many farmers penniless. Recently, a provision made in Gujarat allows non-farmers to be given the status of a ‘farmer’, resulting in the possible misuse of this law. In India, agriculture and animal husbandry are complementary activities. Our economy, especially, the rural economy, is dependent upon both, agriculture and animal husbandry. Pastoralists do not have their own farms for grazing their flocks and herds. They usually take their animals to the grazing lands of the village, vacant lands or farms owned by farmers. Arrangements exist in many places where cattle graze in farms and fertilize them with their dung. However, if farmers were to entrust their lands to somebody on a contract basis, what will livestock feed on?
Next, the agricultural practice of cultivating more than one food grain in a single farm for retaining fertility of the land has been followed through generations.

But a corporate that only intends to maximize profits and is engaged in contract farming, would least likely be interested in the preservation of land and soil. Sustainable development is not on the corporate agenda. Contract farming could entail foreign varieties being grown in India’s fields. For millions, locally grown varieties of crops have provided nutrition and sustenance for centuries. If such varieties are gone, the population will suffer from malnutrition, as is the case in many places today. Farms cannot operate without labor. However, mechanized farming will receive enhanced importance in contract farming, resulting in a decrease in the numbers of farm labourers.

Presently, the deployment of machinery in small-sized farms is uneconomic. But it would be the obvious option for a contractual farming agency possessing larger lands. Increasing rural unemployment would be the consequence .Contractual companies come only for profit. Farming becomes a business, not a way of life or a baseline that maintains the welfare and dignity of the family. Corporates neither look after the farmers’ interests nor are interested in increasing the fertility of the soil. We have reliable scientific evidence that shows chemical fertilizer-based farming is harmful to health and causes tremendous damage to farmland. This development runs contrary to the attempts to maintain or switch to conventional or organic farming or cattle-based farming.

In a democratic country, a farmer has the right to offer his land on contract basis. So, why are there concerns regarding farmland usage? The reason is that today, the government, by focusing on corporate expectations and interests, has ignored the rest of the country. Feeding India is a national and political obligation. However, the government has failed to recognize the importance of maintaining the quality of soil, traditional farming techniques and the social and economic fragility of communities operating on the margins of society.

Contract farming is a novel idea but do short term gains merit the longer-term demerits?
Of the three agriculture-related ordinances promulgated on June 5, 2020, the most predictable was ‘The Farmers (Empowerment and Protection) Agreement on Price Assurance and Farm Services Ordinance, 2020’.Put simply, it provides a legal basis to the existing practice of contract farming in India’s agriculture and allied sectors.

In 2018, the Union Ministry of Agriculture circulated a model law on contract farming. It was called ‘The State /UT Agricultural Produce Contract Farming (Promotion and Facilitation) Act, 2018’. The Ordinance draws from this model Act. It is not that contract farming is new to India or it did not have any legal backing. Under the Model APMC Act, 2003 also, contract farming was permitted and the Agricultural Produce Marketing Committees (APMCs) were given the responsibility to record the contracts. They were also mandated to resolve the disputes in such contracts. However, market fee and other levies/charges were payable to APMCs.

According to Volume IV of the Dalwai Committee report, only 14 states have issued rules to govern contract farming. Despite this, it hasn’t taken off properly and only 15 companies have entered into contract farming for crops in Punjab, Haryana, MP, Gujarat, Maharashtra, Karnataka and Chhattisgarh. Most of these contracts are for cotton and barley. It is clear that contract farming is not yet main stream.

The Centre’s ordinance of June 5, 2020 attempts to provide a national framework for contract farming by bringing uniformity in provisions of contract farming under state regulation enacted under APMC Acts and the laws passed by some states on the lines of model Act circulated in 2018.


All contracts are to be registered with a state level authority to be set up by state governments. In addition, there are several other safeguards for farmers.
Many observers have been studying the reasons for the failure of contract farming to take off on a large scale, even though there are several examples of successful models evolving over the years.

5 thoughts on “Is Contract Farming In India Really Worth It?”