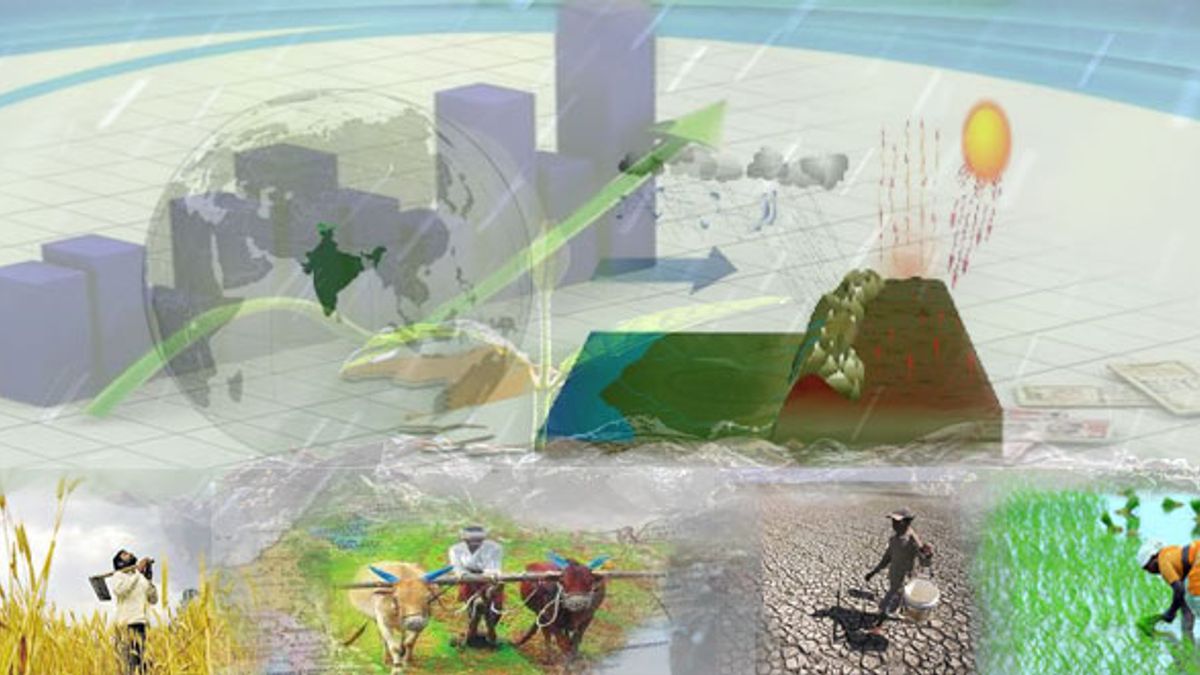 Introduction- he word “monsoon” is derived from the Arabic word for season, and the distinguishing attribute of the monsoonal regions of the world is considered the seasonal reversal in the direction of the wind. The monsoonal region delineated on the basis of significant change in the wind direction between winter and summer (with the direction of the prevailing wind within each season being reasonably steady) extends over a large part of the tropics, namely, 25◦S to 35◦N, 30◦W to 170◦E .The Indian economy is heavily dependent on agriculture and the livelihood of the Indian farmer largely depends on the Monsoon rains. If figures are to be believed, 70 per cent of the Indian population depends on farming, either directly or indirectly. Around 58 per cent of the total employment in the country is through agriculture. In addition, the agricultural sector in our country contributes to around 18 per cent of the GDP. Southwest Monsoon in India is a four-month long affair from June until September. More than 75 per cent of India’s annual rainfall occurs during this period itself. The fate of the Khari crops depend on the performance of the southwest Monsoon. Good rains during the season result in bountiful crops, which further benefit the farmers.

The Southwest monsoon is in full swing as it brings 75% of the rain to the country. The seasonal monsoon winds, blowing from the south-west and the northeast directions are moisture-laden and bring in the yearly monsoon rains. These rains are critical to almost 60% of India’s rain-fed agriculture and the timely arrival and adequacy of monsoon winds plays a vital role in our farming practices. These winds vary across seasons, across years and across decades and this variation is commonly known as monsoon variability.

To adapt to the changing trends in monsoon variability, we first need to look at the situation of each region independently and propose adaptive measures applicable to those areas only. Farming is the only source of income to many farmers in India. In fact, taking in consideration the amount of GDP contribution that the Indian agriculture has, it is a primary factor to affect the economy as a whole. Around 70 per cent of the Indian population depends on farming and 58 per cent of the total employment in the country is through agriculture that contributes to around 18 per cent of the GDP. These numbers bring both, necessary responsibility and limitless risk to a large part of our population.

Types of monsoon in India :
India actually has two monsoons the southwest monsoon and the northeast monsoon.

The Southwest Monsoon, which is the main monsoon, comes in from the sea and starts making its way up India’s west coast in early June. By mid-July, most of the country is covered in rain. This gradually starts clearing from most places in northwest India by October. October is a peak month in the Indian festival season and many Indian families travel during Diwali holidays, pushing up demand for transport and accommodations.

The Northeast Monsoon affects India’s east coast during November and December. It is a short but intense monsoon. The states of Tamil Nadu, Karnataka, and Kerala receive most of their rainfall from the northeast monsoon, while the rest of the country receives most of its rainfall from the southwest monsoon.

How does Monsoon happen: because of high temperature over the Tropic of cancer, the region develops low pressure. The winds from high-pressure water-belts such as Bay of Bengal, Arabian Sea and Indian Ocean, starts moving towards the low-pressure belts. They shift their direction while crossing the equator and start blowing from the south-west direction. The wind is moistened while passing along these seas. This moisture-laden wind causes heavy rainfall across the various places in India.

Importance of Monsoon on Indian Agriculture : Indian economy is vitally linked with the monsoon because of its water resources. A large part of the country gets more than 75% of the annual rainfall during the four months, June to September. The population of India is increasing at a much faster rate than the total food grains production and soon the country may be facing a serious economic crisis. A large part of the monsoon water, which is currently unutilized, should be held at suitable locations for irrigation and possible power generation. In India, Monsoon refers to the rainy season
The humid south-west monsoon winds causes plenty of rainfall during the period between early June and October. A large portion of Indian farmers still depends upon rainfall to carry out the agricultural activities. Since, agriculture is one of the most important constituent on Indian economy (contributing around 16 percent of its total GDP), monsoon season has an indirect impact on its economy as well. India has a tropical monsoon type of climate. So here, the temperature in the summer months is high and the rainfall is heavy. High temperature and heavy rainfall in the summer months are important for the growth of different types of kharif crops in different parts of India.
The amount of rainfall is the most important determinant of the type of crop raised. Wet crops are raised in wet zone and dry crops in the dry zone. Crops like rice, jute, sugarcane, etc. require high temperature and heavy rainfall for their cultivation. Therefore, these crops are cultivated in summer. Crops like those that wheat, barley etc. require moderate temperature and rainfall. Therefore, these are cultivated in winter.
The average of recorded rainfall for the past 50 years is 80 cm. In spite of the introduction of improved irrigation methods, around 40% of our cropped area still entirely depends upon rainwater. Further, a number of dams, reservoirs, rivers, and canals are rain-feed and depends upon the monsoon rains.

Conclusion : The monsoon rainfall is very uncertain. It may arrive early and linger on for a long time or it may arrive too late. It may cause too heavy rainfall in some parts and too little in others. It may course floods and droughts. Therefore, the Indian present lives are at the mercy of the monsoon.

3 thoughts on “Role of Monsoon in Indian Agriculture”